Using Time-out on the Kids in Your Care

I abhor the thought of smacking a child, or caning, or any form of physical punishment. I have never used it, and I have never had the feeling that I needed to resort to it.

The way I explain my position on it is to ask how you would feel if your boss whacked you every time you made a mistake? I imagine you would be devastated, and might follow-up by resigning and taking legal action against your (now) ex-boss.

I am often told that the bible says "spare the rod and spoil the child" as a justification to use corporal punishment. Actually, the bible does not say that anywhere, it's a myth, and my usual response is to ask how many children do you think Jesus caned? It's equally hard to imagine Buddha bashing up a kid.

Another thing I hear is "I was caned as a child and it didn't do me any harm". Well, maybe that's true (who knows), but study after study proves what many of us have always known intuitively - that violence begets violence. Not only that, but it also damages the bond between parent and child. It's not normal to love someone who hurts you.

The world is changing all the time and what we as parents, nannies and child carers are trying to do is raise the next generation in a loving and secure environment, where they learn cooperative behaviour and how to resolve conflict effectively without resorting to physical means. 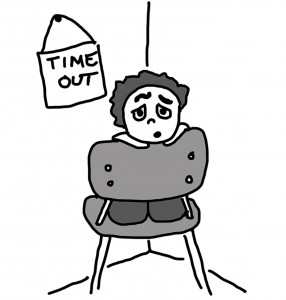 Managing naughty children can be difficult and I realise that parents often hit their kids out of frustration rather than out of a belief that it is the right thing to do, but there is a better, much more effective way. It's called giving time-out.

It is not a harsh punishment, but it does show who is in control, it won't leave lasting psychological scars and it can be very effective.

Before giving time-out, you should give a stern verbal warning explaining that what she is doing wrong, and that repeating the behaviour will result in time out. If the behaviour is repeated, don't give a second warning.